Some may say this is crazy, I call it Wednesday.

This came across my desk yesterday and I worked it out today. It came as the payload following a java exploit from an old 2012 CVE (SecurityManager one I think). I’m calling it 0day because there were no listing for the exe in VirusTotal / Malwr both packed and unpacked. 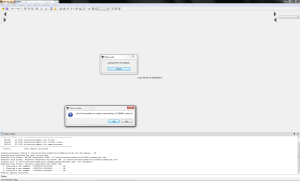 This means the asshat who made this probably knew at some point, someone like me would be taking a look. There are actually quite a few modifications you can do to an exe that will mess up disassemblers but that windows will ignore.

Inspecting the exe with CFF Explorer, we see an error with one of the NT headers, specifically within ‘Data Directories’ at the Delay Import Directory RVA field. CFF is nice enough to highlight for us that the value 0x00000040 is wrong. Zeroing this out seems to fix it. 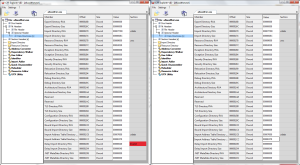 Saving the exe and re-opening in IDA, we no longer get the error and the thing open’s without a hitch.

A quick glance over the exe in IDA shows us its an MFC application. How do I know this? It says so right in the imports section under Library: 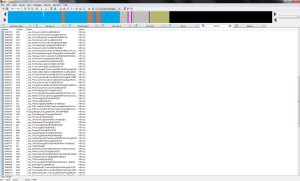 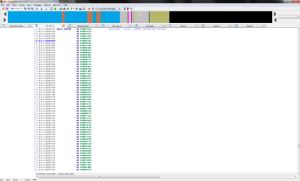 What this means is that, static analysis is out of the question. We need to do dynamic analysis in order to probe further. Immunity away!

Before we get into immunity and the VM, there are a couple of interesting things inside the exe that aren’t immediately apparent in IDA, but show in CFF explorer. For starters, there are a couple files that stick out like a sore thumb hidden in the resources directory.

The first is a PNG file 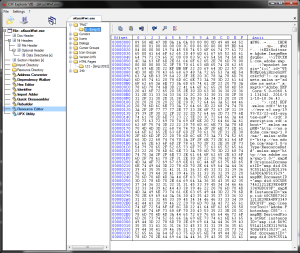 And the second is an html file 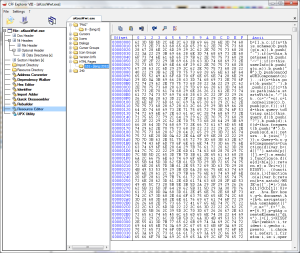 Odd. Viewing the PNG file in IfranView (best image viewer ever BTW) shows a small black image, but it doesn’t add up as the image itself is 55 kb. Obviously something is hidden within. Stenography? 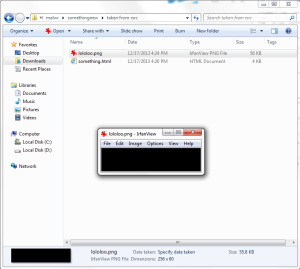 Next we have the HTML file. Loading it up (and cleaning it up) with notepad++, we see some sort of browser detection code: 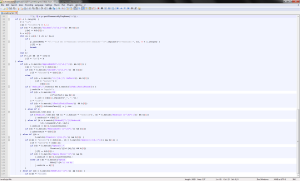 First thing we do is load up Immunity debugger and Virtual Box, and load our anti-anti-debug python plugin. 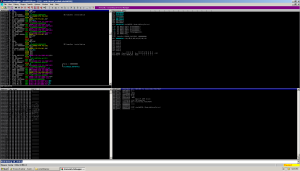 Now we run the sucker and inspect memory after the thing has completed running: 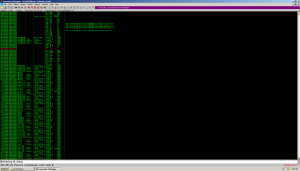 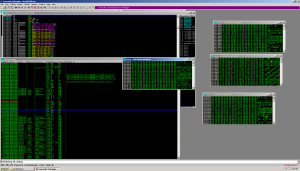 Now we need to dump our programs from memory into a file for further analysis. Bringing up OllyDumpEx and feeding it our 0090 ranges, we see the programs at 0091000 and 00970000 match the original program based on their size, section headers and characteristics. The memory range at 00950000 however is different from the others. We see different section headers, different sizes. This must be our golden egg. 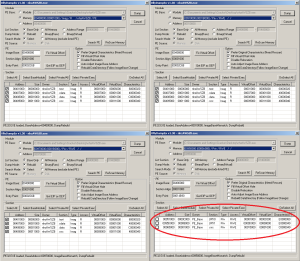 We’re going to dump the exe using the ‘Binary(Raw)’ dump mode instead of rebuild mode as to preserve the integrity of the dumped exe. 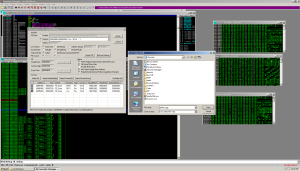 The 2 section headers are a dead give away that the program is packed with UPX. Running the upx utility against it confirms this. This means we can easily unpack our golden egg: 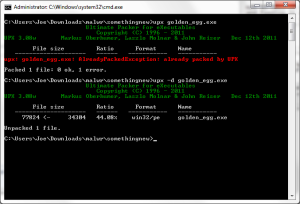 Our new exe is about 40 KB bigger and unpacked proper, so now we can finally take a peek inside with IDA. Taking a look at the strings, we see some interesting info. 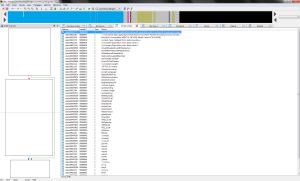 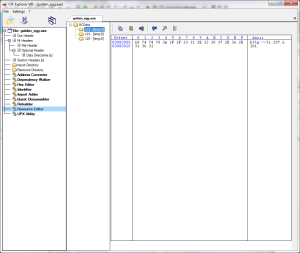 Bingo. http://31.207.6.161. How nice of the coder to leave this in plain text for us. Security through obscurity strikes again.

Now I’m sure you’re wondering what happens when this main application runs. Let’s see what happens:

Upon launch, it automatically closed my process explorer app and any attempts to load task manager are prompted with a quick message box stating “task manager has been disabled by the administrator” before closing very quickly. I wish I could have showed you in the screenshot, but I am not that quick. Improvising with Immunity, we see our original program ‘golden_egg.exe’ is no longer running. Instead some other program named ‘zpNvNKSi.exe’ instead is running, and from the temp folder. Comparing the hashes, they appear to be the same: 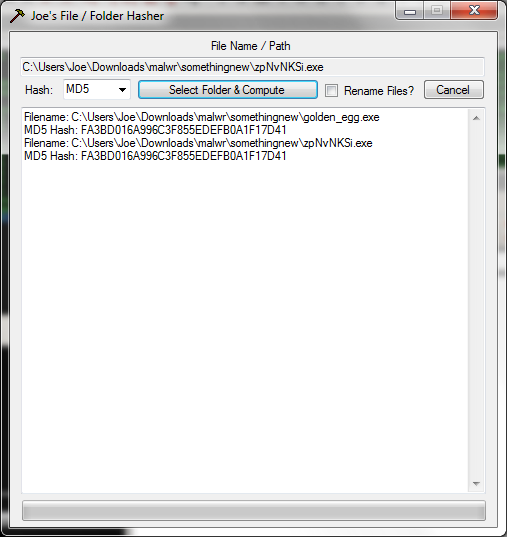 Free advertising aside, its clear what this program does – it disables task manager, kills off “undesirable” applications and runs from the temp folder. Checking msconfig shows it also adds 2 files to start up: 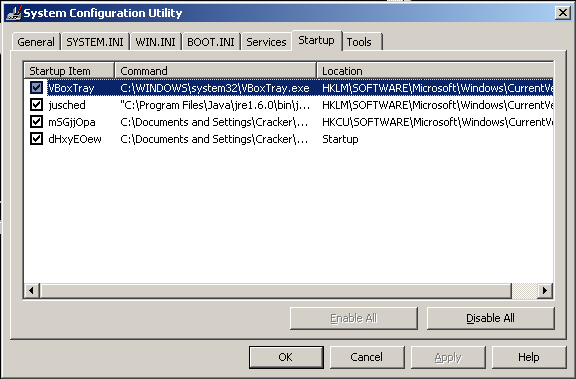 I checked both and they are byte for byte copies of the original program.

Attaching to the program with Immunity and inspecting the program’s memory and thread count (the ‘t’ button) reveals the program is multithreaded. I count 12 threads. 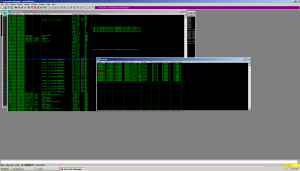 I’m assuming each one of these threads watches one another in case one is killed, however with the main process suspended, we can now open the thing up with Process Explorer and take a peek at the memory. Inspecting, we see a few things that weren’t in our IDA strings: 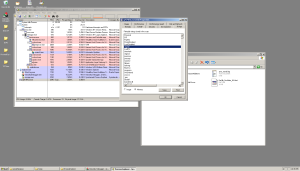 Going out on a limb, I think the program checks for these programs and force kills them if they are run. This would explain why process explorer was killed when the program running. Kind of makes it difficult to run any of these tools when the malware kills them immediately. I see regedit, LordPE, wireshark, regmon, filemon, procmon, tcpview, taskmgr, and even Windows Defender. Harsh. I do not however see Process Explorer’s bastard cousin Process Hacker.

Going back to memory, this means the program was obviously either obfuscating these strings, or is packed a second time. Either way, lets find out. 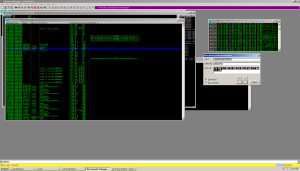 Doing a unicode search for one of the strings we saw in memory from Process Explorer shows the string ‘taskmgr’ is located in the .data section. Did IDA lie to me about the strings? No, not quite. Looking again and doing a slow binary search does show the other strings. I guess IDA doesn’t show unicode strings when it does its search by default. You can change this in IDA by using the shortcut ‘alt+A’ and choosing option 6 for unicode. 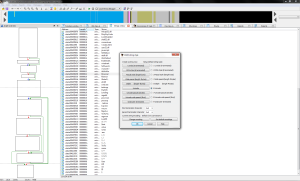 Inspecting the new unicode strings seems to reveal more functionality from this malware. 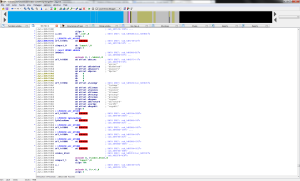 Given the program will kill our attempts to run with WireShark open, we need to locate the functionality responsible for killing the program and patch over it. How do we do this? Locate the TerminateProcess() api call.

Not too hard to find in IDA. Looking in the imports section we see a reference to TerminateProcess. 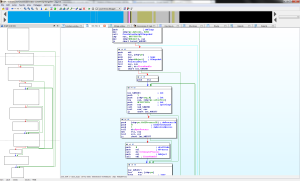 It appears to be some sort of looping logic that looks up process names with the ‘CreateToolhelp32Snapshot’ api and if they meet a certain condition, kills them. That list of names we saw earlier likely corresponds to this. 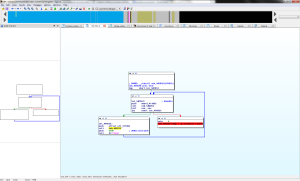 let’s get to it. I prefer to do my patching with Immunity since its easier and I am more familiar. We start by bringing up the sub routine in our running exe. The instruction that has our conditional jump is at ‘0x00401d4e’. By nop’ing out the area, we are forcing the instruction flow to ‘ret’ instead of jumping to 00401d2c which contains our blacklist process killer. 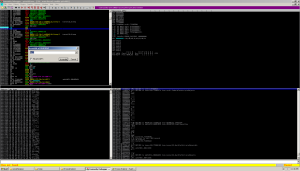 Unpausing our program and letting it run, we test trying to invoke one of the blacklisted programs. It seems to be working because ‘regedit’ worked and ‘process explorer’ wasn’t killed. 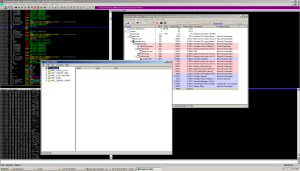 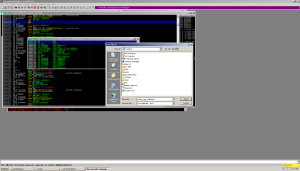 Now we can perform a detailed network analysis with wireshark, file analysis and registry analysis with procmon, and mess around with Process Explorer with the program running live.

We can see with Process Explorer a syn packet being sent to our C&C server (the one we pulled from the resources section) via port 80. 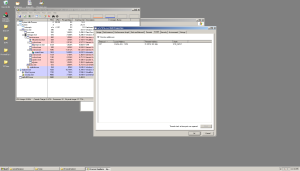 Wireshark is a bit more revealing. We see our syn packets to our HTTP based C&C, however we also see a bunch of DNS requests to some unknown domain names. What’s up with that? 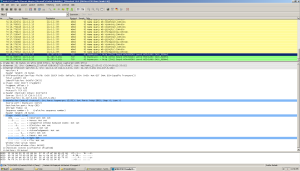 The server will continue to call home, but I don’t want it to. I could modify the resources section in our ‘golden_egg.exe’ file and make it point to my own HTTP server and inspect its functionality, but that’s a lot of work. For now, we have what we need. We have the C&C, we have the unpacked program, we have its HTTP signature, and we have its behavior. Case closed. Another 0day Wednesday come and gone.

Hope you all learned something. Happy cracking!